Fewer Cars, But at What Cost? 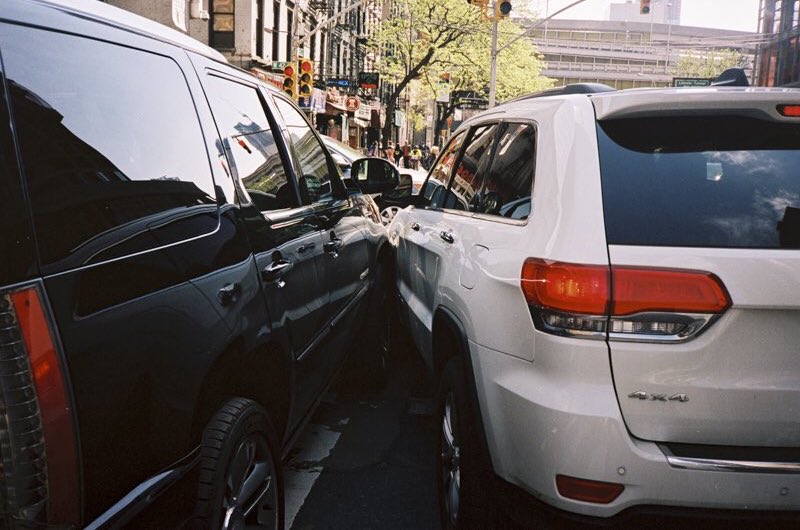 Cars on Ninth Avenue in Midtown brush each other at a busy intersection. Congestion fees would depend on the time and day of the week a vehicle would enter Manhattan below 60th Street. (Image Credit: Liam Quigley)

Jay Dowling drives from Queens to Manhattan four times a week, paying more than $100 in gas and toll fees each week. Considering what he pays, he thinks Gov. Andrew Cuomo’s new plan — to reduce congestion and raise revenue for public transportation upgrades by taxing drivers who enter Manhattan below 60th Street — is just ridiculous.

“There’s a lot of other ways to do that besides always gauging the taxpayers,” said Dowling, a corrections officer at Bellevue Hospital Prison Ward who drives a gray Honda CR-V Hybrid.

Dowling is one of thousands of drivers who oppose Cuomo’s congestion pricing plan. The plan isn’t expected to go into effect until 2021 and could help fix problems that commuters face when they ride buses or subways. A group of experts, picked by the governor and called the Fix NYC Advisory Panel, will determine the fees they will pay.

In 2018, the group proposed fees that ranged from $5.50 to $11.50. The fees would depend on the time and day of the week a vehicle would enter Manhattan. The fees would be charged only once per day.

Click on each time of the week you drive into Manhattan below 60th St. in a passenger vehicle to estimate how much Gov. Andrew Cuomo’s proposed congestion pricing plan will cost you. Your estimate is based on prices proposed by the Fix NYC Advisory Panel in 2018.

Even though drivers oppose the plan, bicycling and pedestrian advocacy groups support it, arguing that its benefits to drivers and non-drivers alike will outweigh the bad.

“Less congestion, less carnage, less crashes,” said Dulcie Canton of Transportation Alternatives, a group that advocates for reclaiming the city’s streets from cars. “Congestion pricing will actually make it better for people that do have to drive downtown. They’ll pay the toll and they’ll actually move.”

Canton cited a 2017 report published by the Tri-State Transportation Campaign that found that not one of the Assembly and Senate districts serviced by the Metropolitan Transportation Authority exceeded a single digit percentage of drivers who would be charged the fee. In some districts, she said, the number was as low as 4%.

“I think people have this illusion that people drive to the central business district every day, and they don’t.”

“Why would we favor that 4% over the 75% that use mass transit, buses and trains?” Canton said. “I think people have this illusion that people drive to the central business district every day and they don’t.”

Lisa Costanzo, 43, doesn’t drive into Manhattan every day. But on Friday, she did, driving in from Sheepshead Bay, Brooklyn, because her wife needed to visit a doctor. She said she doesn’t support the plan because everything is already too expensive.

“To implement any pricing on anything to New Yorkers or anybody at this point is preposterous,” said Costanzo, who was standing outside the Tisch Hospital and holding her Yorkie, Theodore, while her SUV idled in a no-parking zone nearby.

Deborah Horton, 37, the mother of a 7-month-old baby, agreed that the cost of living is too expensive. Sitting in her parked blue Volkswagen Tiguan near First Avenue, she said that congestion pricing would limit her family’s ability to enjoy Manhattan.

On weekends, she said, congestion pricing would “definitely discourage our family from coming into the city and patronizing any of the good stuff, the arts, the museums, the shows.”

But at the end of the day, Horton said, her family probably won’t be affected by the governor’s congestion pricing plan, because they expect to move outside of Charleston, South Carolina, later this month.

“We want to have all the good stuff New York has — the nice restaurants and places to walk around and stuff, but we want it in an area where we can actually afford and have comfort and raise a family and not be in a small apartment,” she said.